Particle hunting at the LHC: the Higgs boson

CERN's Large Hadron Collider (LHC) is the world's largest laboratory experiment. It's a particle accelerator sitting about 100m below the Earth's surface, in a huge tunnel on the Franco-Swiss border. The experiment has smashed together tiny particles of matter in over a million billion collisions in the hope of finding answers to some deep questions about the way our Universe works. This article is about the discovery of the Higgs boson, but you can also read brief introductions to the particles involved, the theory behind the experiment and what other mysteries the LHC might solve.

Until recently, physicists had a mass problem: they had known for a long time that some fundamental particles have mass, but the mathematics underlying the model that described them said they should be massless. In the 1960s Peter Higgs (and others) resolved the mass conundrum by considering the Universe right after the Big Bang, when it was hot and dense. It was already established that contrary to our intuition, we shouldn't think of particles as tiny billiard balls, and instead as ripples in a quantum jelly. Higgs conjectured that at this early time all particle jellies were runny, just like water. But as the Universe cooled down, one particular jelly, known as the Higgs field started to condense and become more viscous. Other particles (or particle jellies), when interacting with the Higgs field, are dragged back, just as a person walking through custard would be. Particles which experience this drag effect are experiencing inertia — one has to push them with a force to get them to move. According to Newton, any particle with inertia also has mass. Thus, Higgs' mechanism tells us how the particles of the standard model — born massless, as the mathematics tell us — may have acquired non-zero masses. The amount of mass each particle feels is proportional to the strength with which it feels the effect of the Higgs jelly. It's a beautiful mechanism and one that was finally declared proven in 2012.

Testing this theory goes back to the idea of jelly ripples: the Higgs jelly, just like other particle jellies, can ripple, and a ripple would look like a particle in experiments — this particle is the notorious Higgs boson, finally detected at the LHC in 2012.

Detecting the Higgs boson starts with a bottle of hydrogen in the CERN accelerator complex. The hydrogen is heated and ionised, and the protons are skimmed off using electric and magnetic fields and stored in the LHC accelerator, which sits in a 27km long circular tunnel, about the same length as London's Circle Line. A complicated set of super-conducting magnets and electric fields accelerate the protons round the ring at speeds close to that of light. There are in fact two beams of protons going around the ring in opposite directions. At various points the streams cross and protons collide. There are huge detectors placed around the crossing points, to observe the particles that come out of the collisions. The ATLAS detector, at 22m as high as a five story building, is one of them. Detectors like ATLAS act like three-dimensional digital cameras: they measure the tracks of particles coming out of the collision in the centre. From the properties of the tracks (how much they curve in magnetic fields for instance), various properties of the particles that made them can be inferred: their electric charges or their energies, for example. 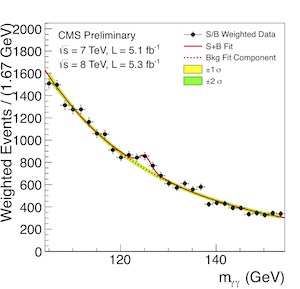 Each collision is in fact a random event — quantum mechanics tells us that one can't possibly predict exactly what will happen in any given collision. However, with the power of the full mathematical theory behind the standard model, we can calculate the relative probabilities of various different things happening. We then measure trillions of collisions, and compare the relative frequencies of the collisions that happen with the expectations from the theory. Assuming that the Higgs theory is correct, we can calculate that on average, one out of several billion collisions will produce a Higgs boson, which will then decay almost immediately into two photons. Because momentum is conserved, in the plane perpendicular to the beam, these photons should come out in opposite directions. Because energy is conserved, their energies should add up to the total mass of the Higgs boson times the speed of light squared. An excess of events with this energy, represented by the bump in the data from the detector, is thus a signal for the Higgs boson as well as a measurement of its mass. And measuring this bump was something of a prize trophy: producing and measuring the Higgs boson finally verified Higgs' mechanism for giving particles mass.