Many problems in life are harder than the sum of their parts. If you have ever tried to control a group of toddlers you'll know this: two can make good company, three are a crowd and five a riot. 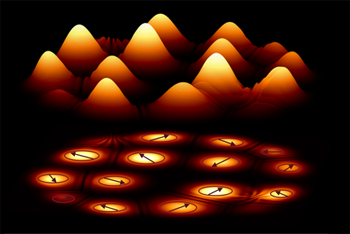 Creating polariton condensates in the vertices of an arbitrary graph and reading out the quantum phases that represent the absolute minimum of an XY Model. Image: Kirill Kalinin

Mathematicians also know that problems can get a lot harder as their size grows. A standard example is the travelling salesman problem, which asks for the shortest route visiting each of a number of cities exactly once. When there are only three cities involved finding the answer is easy, but as the number of cities grows the time it'll take to solve the problem (equivalently the number of steps a computer would have to perform) grows exponentially, so even the fastest supercomputer wouldn't get there within our lifetimes, at least not using the algorithms we know. The travelling salesman problem is a so-called NP hard problem.

But if ordinary computers can't do the trick, what about quantum computers? Natalia Berloff of the Department of Applied Mathematics and Theoretical Physics and Pavlos Lagoudakis of the Physics and Astronomy Department of the University of Southampton, and their colleagues, have proposed and built a quantum device that holds much promise. It's designed to solve a mathematical problem from statistical mechanics that has the same complexity as the travelling salesman problem. The device isn't a full-blown quantum computer because it can't be programmed to solve any problem you like (and doesn't make use of the same quantum phenomena as quantum computers do). It turns out, though, that the problem it is designed to solve has some universality about it. If you can find an efficient method for solving it (one that runs in so-called polynomial time, rather than the much more explosive exponential time) then you can adapt this method to efficiently solve any other NP hard problem.

To get the gist of this problem, imagine a magnetic material, such as iron or nickel. You can think of it as being made up of lots of individual atoms, arranged in an array in space. Each atom has its own tiny magnetic field. The laws of thermodynamics dictate that such a system strives for equilibrium — a state of lowest energy. Since neighbouring atoms can lower their energy by aligning their magnetic fields, they tend to do so. If the temperature of the material is very high, however, thermal fluctuations jostle the atoms and flip their fields, so alignment can't happen. Magnetisation only occurs when the temperature drops below a critical level: large patches of the material then align their atomic fields and the material has become magnetic.

This insight into the workings of magnets gives rise to our mathematical problem. You can represent the array of atoms by an array of points, each of which comes with a variable number called its phase (the direction of the magnetic field) and whose interactions with nearest neighbours are also measured by numbers. You can also write down the formula giving the total energy of the system. This set-up is called an XY model. The task is to find the configuration of phases that minimises the energy. In simple cases this is doable even if the number of atoms is large. In the general setting, however, things can get tricky. Just as the travelling salesman problem, the problem of minimising the energy function of an XY model is NP hard.