What is a black hole – physically?

Please note that since this interview was conducted, hard evidence for black holes has been detected. It comes from gravitational waves. See Black holes exist! to find out more.

What is a black hole?

A black hole is a region of spacetime where gravity is so strong that nothing can escape, not even light. In any relativistic theory, and in particular general relativity, information can only propagate at a finite speed, and the maximum speed at which the information propagates is the speed of light. So if there is a region of spacetime in which gravity is so strong that it pulls even light, and it keeps it within this region, then whatever happens in this region cannot be communicated to the outside world. Once you fall into a black hole you are doomed!

How were black holes discovered?

An artist's impression of gravitational waves caused by a pair of massive stars spiralling towards each other and finally colliding. Click here to see an animation of this process on the NASA website. Image: NASA/Dana Berry, Sky Works Digital.

Firstly, when massive stars run out of nuclear fuel there is no other force in nature which can withstand the pull of gravity. General relativity tells us that under such conditions any such object will collapse [under its own gravity] and form a black hole.

So we haven't [directly] seen [black holes] because they are small, they are dark, [and] so they are very hard to see.

We have seen indirect evidence, for example when there is a star orbiting around the black hole, the black hole sucks gas from the stars. This gas gets very hot as it approaches the black hole and this emits x-rays, which we can observe. We haven't detected black holes directly yet, but this is likely to happen at the end of this year, or maybe next year, with the new gravitational wave detectors.

That's correct. For example, in binary systems, when there are two black holes orbiting each other, because they move they emit gravitational waves. We can calculate the [waveforms that they should emit], the patterns, by solving the Einstein equations with big computers, and we can compare those with the experiments. (You can read more about Einstein's equations for general relativity here.)

Fortunately there seem to be gravitational wave detectors which are going to be ready at the end of this year which are sensitive enough to detect those waves. If the signal agrees with our set of predictions then that would count as a direct detection.

Black holes are defined as containing a singularity where the curvature of spacetime becomes extremely large. Are things really infinite inside a black hole?

This is an excellent question and the honest answer is that we don't know. Often infinity, in physical theories, just simply means that the theory that you use to describe the situation breaks down. So we think that infinities do not occur in nature.

It's just that in [the region of a black hole], curvature is very large but the region is also microscopic in size, so we know that, to describe the physics of these singularities, you would need a theory that is able to describe gravity – namely strong gravitational fields – and at the same time micro-physics – namely a theory of quantum gravity. There are some candidates [for such a theory] but we are still far in terms of understanding how to describe what happens in singularities.

What's remarkable is that the singularities are hidden inside black holes, namely they are covered by the horizon. In the region inside the horizon gravity is so strong that nothing can escape, so even if we do know how to describe the singularities, whatever happens there cannot influence what happens to the world outside. So in some sense, black holes conceal our ignorance in their interior.

What would happen if you passed over the horizon of a black hole?

What's important about the horizon is that it acts like a one-way membrane. It's a soft surface, so you can just cross it and you wouldn't even notice that you'd crossed the horizon.

It's not like the surface of a star where you just hit that and you burn. There is some debate about whether it is indeed a soft surface or not - it's not a properly settled issue - but it seems, according to general relativity alone, that it should be a soft surface. 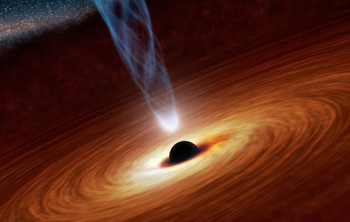 This is in fact one of the experimental signatures that astronomers are looking for in terms of detecting black holes, when you see gas falling into a black hole. If the horizon wasn't a soft surface then you would expect there should be emission of x-rays as the gas falls. This has not been seen. So [it seems that the horizon is] a soft surface: you can just cross it, and in principle if the black hole is large enough then you wouldn't feel anything until it's too late.

If the black hole is small then the difference between the curvature [of spacetime] at your head and at your feet is so large that you get stretched, like spaghetti. It's like [a] tidal effect. But if the black hole is very big then the gravitational field is very uniform, even though it's strong, so the difference between gravity at your head and at your feet wouldn't be that large. You can approach the horizon of a very big black hole, such as the one at the centre of a galaxy, and not feel anything at all.

Close to the black hole, because gravity is strong, time runs slower for you. Even if you could stay there you wouldn't feel much, but if you compared your clock with [the clock of] an observer far from the black hole then you would see that you haven't aged that much whilst he or she has become much older. Other than that you'd be perfectly fine.

Now if you cross [the horizon], then general relativity tells us that once you are inside the black hole you are essentially doomed. You will eventually hit the singularity and you will be destroyed, so it's not something I would advise you to do!

There was wild talk about the Large Hadron Collider at CERN creating tiny black holes before it was switched on. Do we have anything to fear from black holes?

We have nothing to fear from black holes!

We think that this is not dangerous because the energies that we manage to get at the LHC are small. Very small, in fact, compared to the energies of cosmic rays that have been hitting the Earth for billions of years. The upper layers of the atmosphere are constantly being bombarded by super-high energy cosmic rays – these are essentially elementary particles like the ones that we collide at the LHC – and we haven't seen anything strange happening in the upper layers of the atmosphere. The Earth has been sitting here for about four and a half billion years, so we think that producing a black hole at the LHC, if it happened, wouldn't be dangerous. And the experimental evidence indicates that these models are not favoured .

Read the second part of the interview where Pau explains how black holes were predicted, and how the maths of black holes makes them particularly simple to describe.

Watch the full interview with Figueras in this video or listen to it as a podcast.