This problem is the one that’s most obviously mathematical in appearance. It asks for the result of the sum

What are those numbers? If you look closely at the numbers in the denominators of the individual terms,

so it’s easy to see how to continue the sum. The next term would be

This also means that the sum has infinitely many terms, so asking for its result might seem non-sensical at first. However, it's possible for an infinite sum to converge to a particular value: as you add more terms, the results inch closer and closer to that limiting value, getting arbitrarily close to it as you add more terms (see this article for more on converging sums). What the problem is asking for is the limiting value of the sum above. 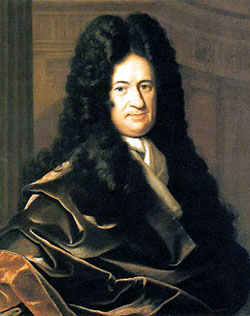 The problem wasn't posed by Euler himself, rather it had already been around since at least 1644, and several well-known mathematicians had worked on it. They included three members of the Bernoulli family, which produced no fewer than eight great mathematicians and also contained an erstwhile private tutor of Euler's (Johann Bernoulli). The great Leibniz, who we already met above, had also tried his hand at the problem but failed to find an exact solution. Soon the problem, which was named after the home town of the Bernoullis, became notorious.

A naive way of attacking the problem is to add up as many terms as you can and see what you get. The problem with the Basel sum, however, is that it converges very slowly. Adding up the first 1000 terms (which would be an extremely arduous task by hand) only gives you a result that is correct in the first two decimal places, but differs in the third. Good approximations, therefore, required some mathematical trickery. "So much work has been done on the [sum] that it seems hardly likely that anything new may still turn up," wrote Euler in a letter. "I, too, in spite of repeated efforts, could achieve nothing more than approximate values ..."

Yet in 1735 Euler succeeded. His truly amazing achievement connects to a number nobody had expected to crop up in the context. The number

which is the ratio of the circumference of a circle to its diameter:

The maths that led Euler to this result is a bit too hard to present here, but it's accessible to A level students. You can read about it in An infinite series of surprises..

The five problems presented in this series are just the very small tip of the very large ice berg of Euler's work. You can find out a little bit more in our articles "Read Euler, read Euler, he is the master of us all" and Euler and the calculus of variations. Alternatively there are many books about Euler, and if you're really brave you can dig into his original papers at the Euler archive.

Yes it is! Thanks for

Yes it is! Thanks for pointing that out, we have corrected the formula.

Am I right that the fraction "1/2" does not belong in the last expression in the article?

You'are right as the denominators of individual terms are the squares of natural numbers.

How did Euler prove it,I think there is no Taylor s series at that time