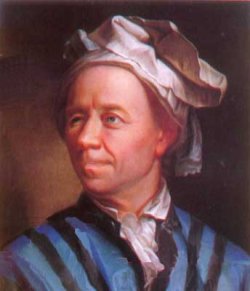 Leonhard Euler is probably the most prolific mathematician of all time. Born in 1707 in Basel, Switzerland, Euler spent much of his life in Berlin. Mathematicians of Berlin are proud of this heritage, which is why it's no surprise that Euler featured in the European Congress of Mathematics, which took place in that beautiful city last month. Günter M. Ziegler, a mathematician at the Freie Universität Berlin and champion of public engagement with maths, delivered a lecture on five famous problems that are associated with Euler.

The beauty of these "five strikes of genius", as Ziegler called them, is that you don't have to be a mathematician to appreciate them: their solution may be tricky, but the problems themselves are easily explained and fun. Which is why we've decided to recap them in this article.

We won't go into Euler's biography here (you can find much interesting information on the MacTutor History of Maths archive and in a variety of books written on Euler). Suffice to say that Euler also spent a lot of time in the Russian city of St Petersburg, where he eventually died in 1783, that he produced more than half of his work after having gone blind, and that he had 13 children. Euler claimed that "he made some of his greatest mathematical discoveries while holding a baby in his arms with other children playing round his feet". Sadly, only five of his children survived their childhood years.

Leaving Euler's biography to one side, let's turn to the five famous problems. You can read them in sequence or skip to your favourite one.

The bridges of Königsberg — Can you find a path through on this city map that crosses every bridge exactly once? Euler's answer to this problem started off the field of graph theory.

The knight's tour — Can you move a knight on a chessboard so that it visits every square exactly once? Euler was one of the first to analyse this problem systematically, but some questions about it are still open today.

The 36 officers problem — Euler may not have cracked this problem completely, but it led to a lot of important work, including on what we today know as sudoku.

Euler's polyhedron formula — This surprising result about 3D shapes tells us something deep about the nature of space.

The Basel problem — Here's an infinite sum that puzzled quite a few famous mathematicians until Euler found the surprising answer.

You have duplicated a description

The description for "The 36 officers problem" is a duplicate of the one for "The Knight's Tour". The links are OK though.

Looks like the officer's problem has the knight's problem description...

Thanks for pointing that out, both! We have fixed the problem.

Thanks - this is a lovely set of problems with historical context for recreational maths time, v enjoyable!