Bang, crunch, freeze and the multiverse

Some of the things I overheard at Stephen Hawking's 70th birthday conference did make me wonder whether I hadn't got the wrong building and stumbled in on a sci-fi convention. "The state of the multiverse". "The Universe is simple but strange". "The future for intelligent life is potentially infinite". And — excuse me — "the Big Bang was just the decay of our parent vacuum"?!

You can listen to these interviews as a podcast! 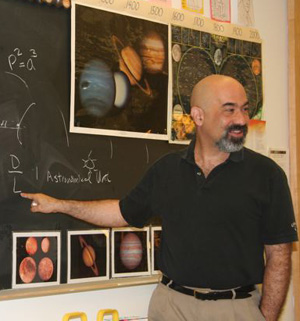 "The Universe got cold enough so electrons and protons could combine to form hydrogen," he says. "So the Universe went from being a dense plasma of electrons to a neutral gas of hydrogen. Radiation can flow freely in that neutral gas, so radiation was able to travel from then to now."

The radiation Spergel talks about is the afterglow of the Big Bang: light whose wavelength has stretched to the microwave part of the spectrum. This makes it invisible to the naked eye, but the glow can be detected using sensitive radio telescopes. The first glimpse of this cosmic microwave background (CMB), as it's called, was captured in the 1960s. It earned its discoverers the 1978 Nobel Prize in Physics and counts as strong evidence that our Universe did indeed originate in a Big Bang. "When we look out at the microwave sky we look back in time by 13.7 billion years," says Spergel. "The image we see in our microwave data is an image of what the Universe looked like back then."

Scientists also believe that the tiny temperature fluctuations trace small variations in the density of matter in the early Universe. Over time the force of gravity amplified these slight irregularities in the distribution of matter into the structures — stars, galaxies, planets, ourselves — we see today. So our complex adult Universe emerged from a nearly uniform beginning. (See also Martin Rees' Plus article From planets to universes.) 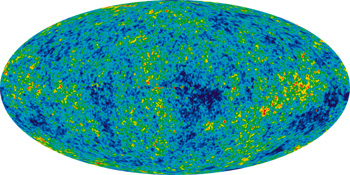 This idea is part of a theory called the standard cosmological model, which describes how the Universe formed. Astonishingly, the model depends on just five numbers. "The five parameters are the Universe's age, the density of atoms, the density of matter, how lumpy the Universe is (how much density of matter varies from place to place), and how that lumpiness varies with scale — are the fluctuations larger on small scales or on large scales," explains Spergel.

Once you know what these numbers are, the theory will tell you what the Universe should look like — and it does so with an amazing degree of accuracy. "Once you specify those five parameters the theory is completely predictive. It predicts the statistical properties of the microwave sky and it's completely predictive about the statistics of matter today. To me what is really incredible is that such a simple model fits so many observables." In this sense the Universe is indeed very simple.

Given its success it's tempting to ask what the standard cosmological model says about the future of our Universe. "In Big Bang cosmology the Universe has two possible fates. One is that it keeps expanding forever, the other is that it collapses in a Big Crunch. I like to think of it in terms of Robert Frost's poem, that the Universe will either end in fire, or end in ice," says Spergel.

"Our current data suggests that it will end in ice. The Universe will become ever less dense, the stars will eventually burn out and things will expand forever. To be an optimist about freezing, as Freeman Dyson has pointed out, if our ability to have intellectual thoughts becomes more efficient with time, faster than the Universe expands, we can stay ahead of the game. The Universe will get colder, but if we can do more with less, something we have to do anyway, then the future for intelligent life could be infinite."

Incidentally, the standard cosmological model also hints at an interesting new piece in the puzzle of particle physics. It fits observations even better if you assume that there's an extra type of subatomic particle, a special type of neutrino, that we haven't detected yet. This is reminiscent of the recently revealed evidence for the Higgs boson: no one caught sight of it directly, but if you build the implications of its existence into your theory, it fits observations quite a lot better (see Hooray for Higgs). "I don't think we have a convincing case yet [that the extra neutrino exists], but the data is suggestive. What's exciting is that over the next year the data will get better. Data from the Planck mission should give us a definite answer on that. And we're hoping that ground-based experiments might do that even quicker."

But despite the standard cosmological model's success, we're still very far away from truly understanding the Universe. "As I mentioned in my talk, the Universe is both simple and strange. Atoms, the stuff we're made off, make up only 4.5% of the Universe," says Spergel. "The rest is in the form of dark matter and what we call dark energy." (You can find out more in the Plus articles What is dark matter and What is dark energy.)

The multiverse and our parent vacuum

And this brings us to the multiverse and the second of my interviewees from that day, Raphael Bousso, a theoretical physicist at the University of California, Berkeley. In the 1990s it was discovered that the Universe isn't only expanding, but that it's doing so at an accelerating rate. Things are being driven apart by a mysterious repulsive force that comes with empty space — that's what we call dark energy. The cosmic repulsion is described by a single number, known as the cosmological constant (see Lambda marks the spot).

The cosmological constant can be thought of the "weight", or the energy, of empty space. "If I take everything away from this room, the chairs, the tables, the air, you might think that there is nothing left," explains Bousso. "But actually the room is still seething with activity." Quantum theory tells us that, surprisingly, empty space is a mass of virtual particles popping in and out of existence.

The behaviour of such tiny particles is described to an amazing degree of accuracy by another theory: the standard model of particle physics. But the model runs into problems when it comes to the cosmological constant. "The problem is that [according to the standard model of particle physics] empty space should weigh a lot more than we know it weighs, by about 120 orders of magnitude. So that's a terribly bad prediction of an otherwise wonderful theory," says Bousso.

What is more, the standard model of particle physics does not take account of the force of gravity. All attempts to fit in gravity have led to mathematical results that make no physical sense. Physicists have been working hard to find a bigger "theory of everything" that can accommodate both particle physics and gravity. One candidate theory (to be precise it's a whole collection of theories) is called string theory. And string theory suggests that our Universe isn't all there is — that we live in a multiverse.

"The multiverse isn't as dramatic as it sounds like," says Bousso. "What people mean, or at least what I mean when I talk about the multiverse, is that the Universe can have regions in which the laws of physics are effectively different from each other. Not because they are fundamentally different, but because the world is put together a little bit differently [in different regions]. For example, if you're a fish and you live in the water, you may not know that there's another place called air. The laws of physics are effectively different in water and air: the sound speed is different, the speed of light is different, the conductivity is different, and so on. Water is just one way of putting electrons and protons together and there are other ways of doing it, so you can make other materials like air, and iron and wood."

"There are theories we have good reason to consider seriously, which tell us that the world that we live in should have widely separated and very large regions — so we really are like fish in a very large tank — which have different laws of physics. The reasons we haven't discovered these other laws is that we have not been able to take the electrons and protons and neutrons apart and put them together in a different way. The energies we'd need for doing this are just too high."

In a multiverse the puzzle of our cosmological constant being so small becomes less puzzling. Nothing forces it to be so small in principle, indeed in other parts in the multiverse it could be much larger. Only we can never experience such parts. "String theory suggests a very large Universe with these different regions and different physics," says Bousso. "If the cosmological constant is too large [in a particular region] then there is no room for complexity, there is no room for observers to develop, so it's not surprising that we find ourselves in a region [with a small cosmological constant] where there is room for us." 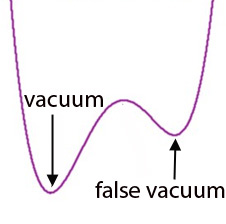 But what about the Big Bang being the "decay of our parent vacuum"? This is where things get truly mind-boggling. In quantum physics a vacuum state is a state with the lowest possible energy. (In accordance with our usual understanding of a vacuum, this usually contains no particles.) Being in a vacuum state is akin to sitting at the bottom of the lowest valley in the energy landscape. However, it's also possible to be in a false vacuum state: this means you're sitting at the bottom of one of the valleys, but not the lowest one.

The idea of the inflationary Universe, which is part of the standard cosmological model, is that the Universe (or some patch of it) started out in a false vacuum state. This false vacuum comes with a negative pressure, which turns gravity into a repulsive force, causing the Universe to "inflate" at break-neck speed, doubling its size in just 10-37 seconds.

However, the false vacuum isn't stable. Just as radio active atoms decay into other elements after some time, the false vacuum will decay into a true vacuum. The rapid inflation slows down and the excess energy is converted into a hot soup of particles. This soup then explodes in the traditional Big Bang as we know it.

But there's another twist to the story. The decay of the false vacuum doesn't have to happen everywhere at the same time, stopping the whole Universe from expanding. Rather, it can happen in small regions in space, creating pockets which then experience a Big Bang event. The idea is that we live in one of these pockets, so we're back to the multiverse. Surrounding these pockets, like a cake surrounding its raisins, the Universe keeps inflating much faster than it can decay, and it will keep doing so forever. This idea (which is compatible with string theory) is called eternal inflation. Science really is stranger than fiction.

I thought the speed of light

I thought the speed of light was constant everywhere....

The speed of light is

I rather like the fish tank analogy. When placed side by side Space would appear infinite but actually be quite finite. Observation only would be a poor predictor of size as that you would peer into other Universes without ever realizing there existed a barrier or that the other side of the other "Verse" had different properties much like a fish would feel outside of it's Universal tank and in Ours. Just a thought. However,this could also partly explain how particles such as photons could travel and bounce back and forth between as if no barriers existed in the first place.