UK Schools have received more than 300,000 CO2 monitors as part of a government initiative that has received significant input from mathematicians though the project CO-TRACE. 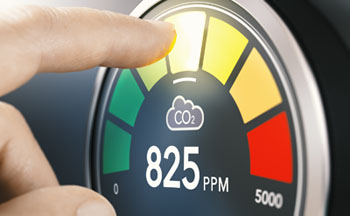 The monitors are useful because airborne infection with COVID-19 happens when people breathe in air that an infected person has previously breathed out. Because exhaled breath contains a lot of CO2, which in most indoor settings couldn't realistically come from any other source, the CO2 level in a room can provide a good proxy for the amount of exhaled air, and thus the risk of infection. When CO2 levels are high, then the risk is high, so it’s time to open the windows.

"The monitors empower teachers to strike a balance between good ventilation and warmth during winter," said Paul Linden of the University of Cambridge, one of the mathematicians who supports the project. "We are pleased that the Government is taking evidence-based action to address air quality and COVID-19 spread in schools."

The mathematics of airborne infections

The evidence Linden alludes to does not just come from experiments and observations, but also from mathematics. The fundamental equation in this context is known as the Wells-Riley model, after the mathematicians William Wells and Richard Riley who originally developed it for tuberculosis and measles.

The model is given by the equation

measures the ventilation rate of the room, that is, the rate at which fresh air enters it.

The equation estimates how many people in a room can be expected to catch a disease from an infected person they are sharing the space with. The result depends on how much infectious material an infected person typically exhales and the average breathing rate of people generally, both quantities that can be estimated in lab experiments. The time people spend together in a room is also an important quantity in the equation — the longer that time the higher the risk of infection — and is easy to measure.

What's trickier is ventilation, that is the rate at which fresh air enters the room. According to the Wells-Riley model the risk of infection crucially depends on ventilation, yet in practice the ventilation rate will differ from setting to setting and is generally hard to measure. This is why in 2003 the scientists S.N. Rudnick and D.K. Milton modified the Wells-Riley equation, so that the risk of infection can be estimated directly from the CO2 concentration, which serves as a proxy for the amount of exhaled air in the room.

Linden and his colleagues have built on this work to produce a model that applies specifically to COVID-19. It provides a way of estimating the risk of infection in a typical school setting, where the same group of (potentially noisy) people occupy a room over the course of an entire school day. The work confirms that CO2 levels are an excellent way of measuring infection risk. And since CO2 is easy to measure and monitors are cheap, the result is an accurate and practicable warning system.

The monitors, which were supplied by the Department for Education, are portable and easy to use, allowing teachers to see changes in the CO2 level in real time and using colour-coding to indicate whether the level is good, normal or poor. They come with guidance for teachers on how to act on the monitors' readings, produced by the scientists behind CO-TRACE.

Useful advice includes opening higher-level windows before lower-level ones if ventilation is necessary, and closing windows gradually when the CO2 level is safe. Should a school find that CO2 levels are consistently bad despite ventilation, then it might consider using air cleaners. Between 7,000 and 8,000 of such cleaners are also being distributed by the Department for Education.

The monitors help students have the chance to continue their education despite the ongoing COVID-19 pandemic. But they will also be useful in other ways too, keeping at bay other bugs like measles and flu, and contributing to the improved learning outcomes that are known to come with lower CO2 concentrations.

This article has been adapted from a story that first appeared on the Imperial College website.

You can read more about the Wells-Riley model in this short introduction and in the article Clearing the air: Making indoor spaces COVID safe.