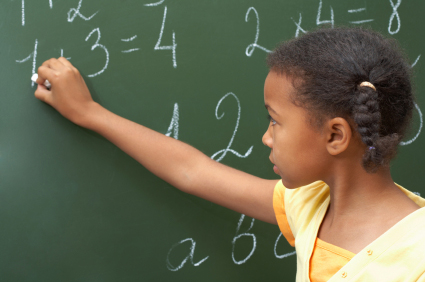 People and animals are born with a sense for numbers.

"You work it out," is what people usually say to me when we need to split a bill in a restaurant. The idea is that since I'm good at maths, I must be good at mental arithmetic. But in my case, and that of several mathematicians I know, that idea is wrong. I'm pretty bad at doing sums in my head, much worse than some of my friends who are self-proclaimed maths-phobes.

If you think about it, this isn't particularly surprising. Maths beyond the basic level isn't really about numbers, but about logic, symbols, patterns and shapes. As a mathematician you rarely need to do sums, so your mental arithmetic can get rusty. However, mathematicians, along with other people and also animals, are born with a primitive number sense. Could mathematicians have developed their mathematical ability in the first place if that inborn sense had been shaky?

This question was the subject of recent study by psychologists from Johns Hopkins University. Melissa Libertus, Lisa Feigenson and Justin Halberda wanted to find out how mathematical ability is linked to something called the approximate number system (ANS). The ANS supports our ability to estimate at a glance which of two bowls contains more cookies or how many people there are at a party. It's something we are born with and it's also found in animals, who use it in hunting or gathering food. (See the Plus article Natural born mathematicians.)

The question is whether a good inborn number sense goes hand in hand with mathematical ability. Previous studies suggest that it does, but each is open to a particular point of criticism: rather than measuring volunteers' true ANS, they may have measured their previous educational experience. This can happen if the volunteers are too old, so that their inborn number sense has already been augmented by education, or if the ANS test itself requires previous mathematical education — for example having learnt to read and understand numerical symbols. (See the Plus article Guessing is good for you for more on previous studies.) 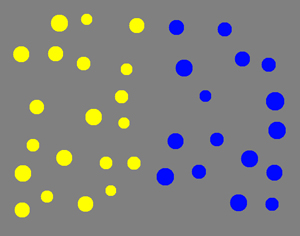 Can you tell at a glance if there are more yellow or more blue dots?

To avoid these pitfalls, the authors of the new study tested 3 to 5-year old children who had only had a minimal formal education. To measure their ANS, the children were shown images of blue and yellow dots that flashed up briefly on a computer screen. They were then asked if they'd seen more blue dots or more yellow dots. The dots were of different sizes and spread around the screen to make sure that children weren't simply estimating the number of dots by the area they were taking up on the screen. (You can take a very similar test yourself here.)

For each child the researchers measured the percentage of correct answers, the average response time, and a number measuring a child's overall accuracy called the Weber fraction. The researchers also took account of the difficulty of each particular screen image a child was shown. This depends on the ratio of blue and yellow dots: if there are many more blues than yellows or vice versa, the task is easy, but if the ratio is close to one, it's hard.

To measure their maths ability the children were given the TEMA-3 test designed for 3- to 8-year olds, which measures a range of maths skills. The researchers also asked the children's parents to assess their child's range of vocabulary. Since maths ability is to some extent linked to language skills, this helped to make up for the fact that some children will do badly at tests because they don't like being tested, while others perform well at all sorts of tasks, not just maths.

The overall analysis of the children's results suggests that there is indeed a strong link between ANS and maths ability: the more accurate their inborn number sense, the better they tended to do at the maths tests. "Unlike [previous] studies, this one shows that the link between number sense and maths ability is already present before the beginning of formal maths instruction," says Libertus. The ANS itself is independent of language skills, so presumably the results also suggest that language is not a pre-requisite for maths ability, as some people have suggested (see Plus articles Speechless maths and Evolutionary maths).

What is not yet clear, however, is why this link between ANS and mathematical ability exists. Is it because a better inborn number sense makes it easier for children to pick up maths, or because a less accurate number sense leads children to avoid maths activities right from the start and therefore never develop their potential? "There is much we still have to learn about this," says Libertus. "But what we have done raises many important avenues for future research and applications in education. One of the most basic is whether we can train children's ANS and thereby improve their maths ability, and whether we can develop school maths curricula that make use of children's ANS abilities and thus, help them grasp more advanced maths concepts earlier."

Personally, I have often wondered why early maths teaching needs to be so strongly linked to numbers. Perhaps we should make more use of other aspects of maths — patterns, rhythms and forms — so that children with a shakier number sense can also enjoy it. As for my own talents, the study suggests that I did once have a reasonable number sense. Perhaps I still do: in my mind's eye numbers arrange themselves neatly along a straight line, which turns right at 100 and then continues east-wards to infinity. My failure to convert this sense into impressive feats of mental arithmetic is probably down to laziness.

Interesting post, this is probably why I have huge interest in math but, for some reason always have a hard time taking tests for it. I noticed this problem in high school... I would do extremely well on the homework's and class assignments but, when it came to standard tests I would lock up or start getting bored really easily. I guess my ANS wasn't developed on an early age. Oh well... more studying for me.