Metallic numbers: Beyond the golden ratio

You've heard of the golden ratio. It's portrayed in films and literature as the alternative answer to life, the Universe, and everything. And indeed, it's everywhere: from sunflower seed patterns to ammonite shells and, supposedly, the "perfect" ratio for aesthetic faces and bodies. As such, it tends to outshine its little brother you might not have heard of yet — the silver ratio.

Before we talk about the silver ratio, we'll recap what the golden ratio is. To paraphrase the ancient Greek mathematician Euclid:

We can see what this looks like in the following diagram:

, is approximately 1.618 in numerical value.

We can find this value by first expressing Euclid’s definition algebraically:

Multiplying the last expression through by

gives us the quadratic equation

Since we are dealing with positive lengths, we ignore the negative solution, leaving us with

. The numerical value of the silver ratio is approximately 2.414.

Once again, we can deduce this algebraically:

This has positive solution

To recap, the golden ratio involves dividing a line into two segments and the silver ratio involves cutting it into three segments, two being of equal length. This suggests the possibility of further generalisation...

Suppose we divide our line into

segments of equal length, which we call

, and one smaller segment of length

. If we require the ratio between

for this ratio means that

so in analogy to our calculations above we have

The positive solutions to this equation is

, one for each value of

are called metallic ratios, or metallic means. For

we get the golden ratio and for

Metallic ratios share many common properties: they are linked to infinite sequences reminiscent of the famous Fibonacci sequence, to very special rectangles and to logarithmic spirals. We will explore these in the second part of this article. 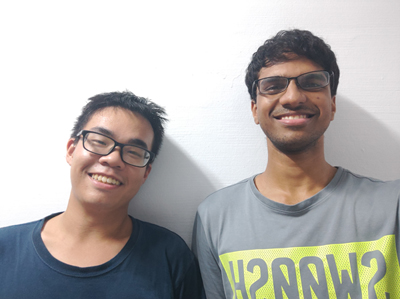 Permalink Submitted by Will Walker on January 29, 2020

Accidental substation of 'C' for 'B' in the general formula.

Permalink Submitted by Marianne on January 30, 2020

Thanks for spotting that, we've fixed it.

Permalink Submitted by Stephen A. Clarke on January 31, 2020

I enjoyed your article and appreciate your dabbling into math and then sharing. I thought I had seen most of the info on the Golden Ratio
and I believe I may have heard about the Silver Ratio. But definitely not the extension! Now I have a new investigation to pursue. Thanks for a great diversion from all the politics in the U.S.