The STEM for BRITAIN awards

Mathematics is incredibly important to our lives, but it still often hides in the wings. This is why we're extremely pleased that in Monday 20 early career mathematicians got to present their work to politicians in Parliament, via the STEM for BRITAIN competition. This annual event invites researchers in maths, engineering, the biological and biomedical sciences, chemistry, and physics to submit posters explaining their work. Around 120 of them are then chosen across all subjects for a poster exhibition in parliament, and a panel of expert judges chooses three medalists for each discipline. 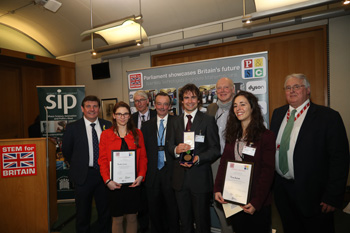 The maths medal winners with representatives of some of the supporting organisations.

"This annual competition is an important date in the parliamentary calendar because it gives MPs an opportunity to speak to a wide range of the country’s best young researchers," said Stephen Metcalfe MP, Chair of the Parliamentary and Scientific Committee, which sponsors the mathematics awards. "These early career engineers, mathematicians and scientists are the architects of our future and STEM for BRITAIN is politicians' best opportunity to meet them and understand their work."

Martin Bridson, President of the Clay Mathematics Institute (which sponsors the Gold medal in maths) saw the event as a celebration of the unifying power of maths. "[The event] shows the beauty, the power and universality of mathematics. As we all know, scientific ideas have no borders and don't recognise ethnicities. When a theory is proved, it belongs to the whole of mankind. I'm absolutely delighted at the quality of the work and the young talent on display today."

So without further ado, here are the three medallists of the STEM for BRITAIN Mathematics Award 2022.

Matthew Tointon, a lecturer in Mathematics at the University of Bristol, won the gold medal which earned him £1,500. Tointon's work focusses on graph theory—a graph is a collection of nodes connected up by links between nodes, in other words, it's a network. Graphs turn up all over the place in the real world. The London tube map forms a graph, and so does a network of water pipes, or people connected up through friendships. 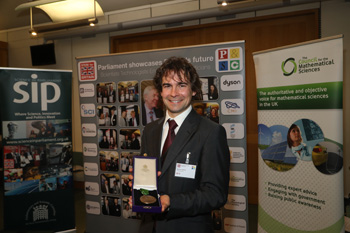 Given a graph, there are many things you can imagine doing. For example, you might imagine moving around it randomly, much like a gush of water might travel through a network of pipes. Or you can imagine taking it apart by randomly removing links between nodes, a bit like people in a social network restricting their contacts during a pandemic. Both scenarios pose questions. Where is a random walk around a graph likely to take you? If you randomly remove links, will the resulting graph still hang together and how?

Mathematicians have found answers to these questions for infinite graphs, that is, graphs that have infinitely many nodes. In fact, there's an interesting connection between the two kinds of questions we raised above: the way a graph responds to having random edges removed is intimately linked to whether a random walk on it is likely to take you "off to infinity" before returning to the node you started at. Since real-life graphs are always finite, it makes sense to translate such results to the setting of finite graphs — and it's in this area that Tointon has made significant progress, using techniques from various area of maths. You can find out more in this brief explanation of his work. (For a very relevant application of the kind of questions Tointon's work involves, see this Plus article, which explores the effect of household bubbling on the spread of COVID-19.)

"It feels fantastic, I have to say. I really enjoyed coming here," said Tointon about the event. "It's very easy to imagine, as a mathematician, that your work is just being contained in a theoretical box and only existing for its own sake. Taking part in this competition has made me think harder about how to justify it to a broader group of people, who may not be interested in mathematics just for its beauty."

Teresa Bautista, a postdoctoral research associate at King’s College London, won the silver medal which earned her £1,000. Bautista works in the mind-boggling field of cosmology, which heavily relies on mathematical tools. Cosmologists have known since 1998 that, not only is our Universe expanding, but the rate at which it does is accelerating (see here for an explanation). This means that there are reaches of the Universe we just can't see: to observe a star, we must detect light that is emitted or reflected from it, but light travels at a constant speed which may not be able to overcome the speed at which the star is moving away from us. In fact, the visible Universe is bounded by a cosmological horizon beyond which we cannot see. 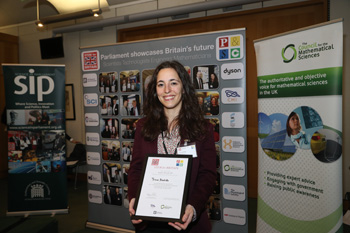 If you know something about black holes, then this might remind you of their event horizon. That's a boundary of no return: once you have passed the event horizon of a black hole, you will never again be able to escape. But although black holes gobble up everything that passes the event horizon, they are not completely black: in some ground-breaking work Stephen Hawking showed in 1974 that they emit radiation (find out more here), which means that they can be thought of as having a temperature. The discovery led cosmologists to apply ideas from the theory of heat and energy, called thermodynamics, to black holes. For ordinary materials we know that temperature arises from the behaviour of atoms and molecules: the more vigorously they move, the hotter the material. Insights from this thermodynamic approach then also led to an understanding of the microscopic make-up of black holes: they are made up of what you might think of as gravitational atoms.

So here's a tantalising question: is our cosmological horizon also composed of microscopic gravitational constituents? It's this question that Bautista's work explores. Her research is intensely mathematical because both the theory which best describes gravity (Einstein's general relativity) and the theory which best describes the world at very small scales (quantum physics) are written in the language of maths. Incidentally, finding a mathematical framework that can encompass general relativity and quantum physics at the same time, a theory of quantum gravity, is a major challenge in theoretical physics, and comprises part of Bautista's research. (Find out more in this brief introduction to Bautista's work.)

"It's both unexpected, and fantastic at the same time to win this award," says Bautista. "As scientists, we have to learn to explain what we are doing to the rest of society, because it's increasingly important that there is no gap between the scientific world and the world in general. The more I work on my research, the more excited I am, and I hope I can stay in this career and keep exploring what this expanding universe has in store for us all."

Desislava Ivanova, a DPhil student at the University of Oxford, has been awarded the bronze medal which has won her £750. Ivanova's work focusses on the optimal design of experiments — be they experiments to test a new medical drug, evaluate new methods in agriculture, or find the best way to produce a product. Although experiments are performed in all areas of science and industry, mathematics can provide deep insights into how to design an experiment so that the result it gives you as much information as possible in a robust way. 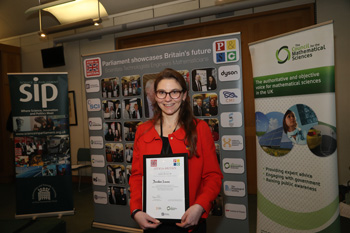 Because performing experiments always involves collecting and analysing data, statistics and probability theory play and important role in this areas. An example is a result called Bayes' theorem, which allows you to update what you know about a certain situation (eg whether a medical drug is effective) in the light of new evidence (eg a new medical trial). A mathematical framework called Bayesian experimental design applies the result to the process of coming up with optimal experiments. The experiment you want is the one that maximises the amount of information you gain from it, and Bayesian experimental design allows you to update what you know about an experimental process in the light of what experience of that process has shown you.

Although Bayesian experimental design has huge potential it comes with challenges: it takes a lot of computer power to implement and still requires more human input than you'd want. This is where Ivanona's work comes in. Together with colleagues she has developed a new approach to Bayesian experimental design, called deep adaptive design, which makes use of a powerful tool from artificial intelligence called machine learning. As Ivanova and her colleagues put it in the introduction to their work, "the framework is the first to enable automated, real-time, adaptive experimentation, making it a truly transformative innovation." (Find out more in this brief introduction to Ivanova's work.)

"I'm super happy about the third place, of course, but I'm just really glad that I had the opportunity to speak to so many other people about both their research and mine," said Ivanova. "I work in the field of experimental design and there are so many ideas about future extensions of the projects that I'm working on. The next challenge is finding the time to do so!"

And as Paul Glendinning, speaking on behalf of the Council of the Mathematical Sciences, reminds us, the usefulness and beauty of mathematics also translates into huge economical benefits: "According to research from Deloitte, maths is deemed to be responsible for 17% of the UK's GDP - and that is without counting the value of Big Data. The privacy of our banking, the integrity of our national security, the innovation of new ideas and greater efficiencies, can all be traced to mathematics. So a great thanks to all of those that took part in this year's STEM for BRITAIN awards and for showcasing mathematics. It has showed a wonderful diversity of ideas, and just as importantly, a wonderful diversity of people."