If our Universe is expanding, then what is it expanding into? 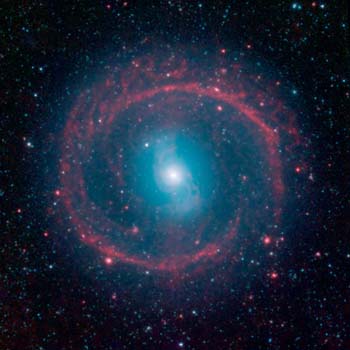 Galaxy NGC 1291 as seen by the Spitzer Space Telescope. the expansion of the Universe means that the distances between galaxies are getting bigger. Image: NASA/JPL-Caltech.

There are a couple of metaphors often used to help people visualise an expanding universe. Cosmologists believe that our Universe is infinite an uncurved. Dropping down a dimension, let's think of the Universe as a rubber sheet that is infinite in all directions. If this sheet is being stretched, then no matter where you stand on it, you'd see everything expanding away from you. The sheet isn't expanding into anything but itself, and it doesn't have an edge.

It's not been that long since cosmologists have found strong evidence that the Universe is infinite, and there is still the possibility that they are wrong and it's finite. This doesn't mean that it has to have an edge. Again dropping down a dimension, think of the surface of a sphere. It's finite, but it has no edge: you can walk around on it forever without falling off. The shape of the Universe may be the 3D analogue of a sphere, which is hard to imagine but easily described mathematically.

Now imagine drawing lots of dots on the sphere and inflating it like a balloon. If you were a tiny bug living in the surface of the sphere, you'd see all the dots moving away from you. If you had no notion of the inside or outside of the sphere, all you'd be able to say is that your universe is expanding. It wouldn't make sense for you to ask what it is expanding into, because you can't perceive that surrounding space, so as a sensible bug you wouldn't ask.

But still. The analogy implies that there's a surrounding space, a third dimension, into which the bug universe expands. Also, the bug universe is curved: it's a sphere. And a sphere, as well as any other curved surface, can only be thought of as sitting in a bigger space. Or so it seems.

Applying this to our Universe, which has one dimension more than the bug's universe, the analogy suggests that there is a larger 4D space our perceived 3D Universe is embedded in and expanding into, coming from an extra dimension we can't perceive. The surrounding space also defines the curvature of our Universe, which is what allows it to close up like a sphere and be finite. If we believe that our Universe might be finite, shouldn't we then try to find out more about that extra dimension? Perhaps there is a way we can detect it after all.

So are we stuck on this expanding universe idea? Luckily we're not. You don't actually need a higher-dimensional space to define the curvature of a lower-dimensional space sitting within it. There's a mathematical notion of the intrinsic curvature of a space, which can be measured from within, rather than by seeing the space from the outside (find out more here). The notion of intrinsic curvature was developed by the mathematician Bernhard Riemann, following on from Carl Friedrich Gauss, long before physicists became interested in it.

Our mathematical descriptions of the Universe (which rely heavily on Einstein's general theory of relativity) work with this intrinsic curvature. They don't worry about any surrounding space the Universe is bending into. Similarly, they can deal with the notion of the distances between points in the Universe stretching (the Universe "expanding") without worrying about the Universe expanding into anything.

The best answer to the question of how to visualise an expanding Universe is therefore "don't try". We don't need to visualise it because we have the mathematical tools to understand it and visualising it does not lead us very far. Our intuition of space is too limited for us to come up with a fool-proof analogy. That may be unsatisfactory, but it's another victory for maths as a tool for describing things we cannot imagine.

Now you might have heard that physicists are looking for extra dimensions at the Large Hadron Collider at CERN. This is nothing to do with the Universe's expansions however. The extra dimensions are posited by string theory. Unlike our balloon-inspired train of thought, which didn't explain anything, string theory, if it's true, can explain a lot. It was developed to solve one the most fundamental riddles of modern physics, so any evidence of it being true, like extra dimensions, is well worth looking for.

Read more about...
cosmology
curvature
curvature of space
The physics of observers

Based on the current collective consensus, the concept of an 'expansion' is consistent with the redshift/blueshift observations. However this Doppler effect was only meant to measure the rate of 'expansion'. The concept of 'expansion' was first presented as calculation in 1922, which was based on the general theory of relativity. Assuming the agreed upon cosmological principle, it was then inferred that this 'expansion' would exist everywhere; even beyond our observable universe.
That is to say if we were able to travel to where we imagine the CMB boundary is, we would instead find a similar perspective of the universe as from where we view it from Earth. That being said, looking back to our Earth, we would only be able to see this fog of CMB. So there is no real notion of the size of the universe. And we can only guess at how old it is, based on the calculations of Lambda-CDM model.
And all these equations we based on model that does not understand on include the concept of dark energy. For as we all might be able to agree, the existence of baryonic matter only warp the pre-existing fabric of space-time. Take away the positive density matter and you would still have a vessel in which the matter once existed.
So if the 'Big Bang' expansion theory rubs you the wrong way, try thinking of the proposed one dimensional singularity as the pre-existing fabric of space-time without any real matter, rather than a singular point as modeled after a gravitational singularity [liken to a black hole]. Then start unfolding it into existence; first into two dimensional space-time, which is an expansion from our one dimensional space-time, and then into a three dimensional space-time and so on.
I would actually recommend the book, 'The Evolutioning of Creation: Volume 2', where such an alternative perspective of the universe is explored.