Maths in a minute: Machine learning and neural networks

One of the most significant recent developments in weak artificial intelligence is machine learning – where rather than teaching a machine explicitly how to do a complex task (in the sense of a traditional computer program), instead the machine learns directly from the experience of repeatedly doing the task itself.

Advances in engineering and computer science are key to progress in this area. But the real nuts and bolts of machine learning is done with mathematics. A machine learning algorithm boils down to constructing a mathematical function that takes a certain type of input and reliably gives the desired output. 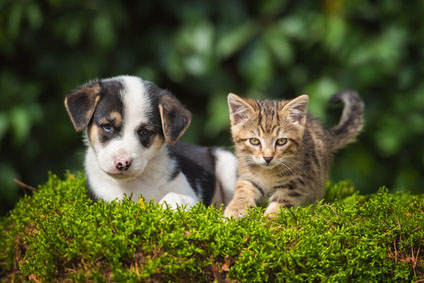 For example, suppose you want a machine that can distinguish between digital images of cats and dogs. An image can be treated as a mathematical object – each pixel is actually represented as a number identifying its colour, and the image as a whole is represented by the long list of the values of the pixels (acting as a vector in some very high-dimensional vector space). The machine then applies a complicated function to this mathematical version of the picture and outputs either "cat" or "dog".

We are used to functions having parameters: for example the general equation for a line

that gives the slope of the line, and

that tells you where it crosses the vertical axis. Similarly functions resulting from machine learning algorithms have some general structure which is tailored by parameters, but these functions are more complicated and have many, many parameters.

At the start of the learning process the parameters are set to some values, and the algorithm processes the training data, returning the answer "cat" or "dog" for each picture. Initially it is likely to get a lot of these answers wrong, and it'll realise this when it compares its answers to those from the training data. The algorithm then starts tweaking the parameters until eventually it has found values for them that return the correct answers with a high probability.

There are various approaches to machine learning but the most common method is using something called a neural network. This is really a way to structure a complicated mathematical function. Artificial neurons, which themselves are a mathematical function, are arranged in a series of layers, taking a linear sum of the outputs of the neurons in previous layers as an input. Then a neuron applies a nonlinear function to that input and then passes the output of this on to the neurons in the next layer.

The network is then trained by working through lots of training data, and applying a machine learning algorithm that tweaks the parameters in the linear sums that link one layer to the next. With enough training data the parameters are tuned until the neural network has settled on a complicated mathematical function that carries out its given task, such as correctly distinguishing between cats and dogs.

Machines have successfully taught themselves how to beat us at games like chess and Go, rather than us teaching them all our best moves. Machine learning is now part of our everyday life – you use it when you speak to your digital devices, when you click on a recommended product from an online store, or when you use language translation apps and websites. And not only that, machine learning is now playing important roles in medicine, particle physics, and monitoring traffic and analysing tree cover.

Read a more detailed introduction into machine learning with this great collection of articles by Chris Budd (which this article is partly based on). And find out more about the many applications of machine learning on Plus.