We live in a golden age of information. Never has so much of it been available so easily to so many of us. Information is power, it's money and, given how much of our life is lived online, defines part of our reality. 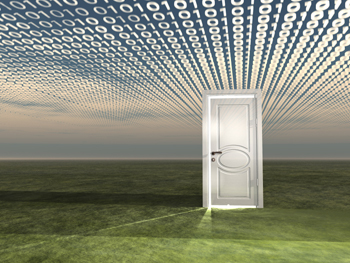 But what exactly is information? We tend to think of it as something that lives in our heads: lots of facts and ideas that help us find our way around the world. And indeed we, as well as other animals, have evolved exceedingly complex organs to gather it. There's no doubt that information is important.

It also seems clear that information isn't a physical entity. "One of the big things we've discovered in recent decades is that a book is not actually stuff written on a page," explains George Ellis, a cosmologist and mathematician who has thought a lot about information. "A book can be [printed on paper], but I can also read you the book, or you can buy it in digital form. The question is, what is the book? It isn't any of those things. The book is an abstract thing which is realised in different forms. It can be realised as [symbols] on a screen, it can be stored in a computer's memory, it can be on paper, and so on. But the point is that the information itself, the information in the book, is abstract."

Despite this abstract quality, there is no doubt that information is just as "real" as the pages it's printed on. Information can effect change in the world. It can cause or prevent wars, drive the global economy into meltdown, and help you decide on your holiday destination. Much of what we do is prompted by having received some form of information. 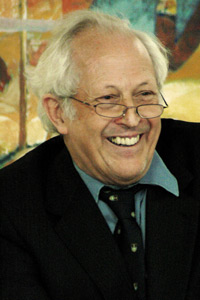 How can something so woolly and abstract be so powerful? The power of information clearly isn't hard-wired into the words or symbols that convey it. The little word "yes" can mean "yes, I'd like a cup of coffee" or "yes, Iraq has weapons of mass destruction". The effects this word can have in the real world range from absolutely none at all to war. Everything depends on context and interpretation — it depends on meaning.

We usually think of information as something passed between people, through books, the media or personal conversations. These kind of messages have been consciously put together by someone with an intention, and some of their meaning derives from that. But we are also constantly bombarded with accidental, unintended information. The sound of a slamming car door, for example, or of a rock falling in the mountains. This "passive" information is a by-product of physical processes that happen around us and we have evolved an impressive ability to ignore it. Imagine the chaos if our brain treated everything you hear, see, feel or smell, with equal urgency. The conscious brain ignores almost all of this incoming data and only pays attention to what is relevant. But again, this information can acquire meaning from its context: if the sound of a falling rock could signal an avalanche, you run.

But passive information stores immense power not just in terms of immediate survival. Since it's generated by physical processes (a rock falling under gravity) a closer look at it can reveal their inner nature. This is what science is all about: analysing the accidental information the world gives us to understand it better. Ultimately it's where everything we know about the world comes from.

All this seems to suggest that information can only have consequences in the real world if a person, or reasonably intelligent animal, interprets it and takes action in response. Biology teaches us, however, that this is far from true. The most important data base of them all is neither designed, nor controlled, nor interpreted by humans: it's the information stored in our DNA, which dictates what kind of person we are. "Information is absolutely central to biology," says Ellis. "It is obviously effective because we wouldn't be the shape we are if that information wasn't stored." 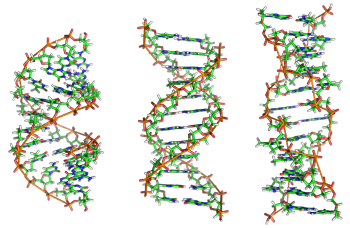 The information encoded in our DNA dictates what kind of person we are.

Where does that intent come from? The naive response to this question is to invent a god. But the intelligent response is to look for the answer in adaptive processes in the physical world, which garner and store information appropriate to enhancing survival prospects in specific biological and ecological contexts. Just like everything else in the world, DNA is made of molecules, which are made of atoms, which are made of the fundamental particles of nature: electrons, quarks and so on. The processes that happen at the smallest scales of physics underlie chemical and biological processes, including those involving DNA and the information it conveys. The big question is: 'how'? "There's a big gap between information [such stored in DNA] and physics, but the physics underlies the causal efficacy of that information," says Ellis. "One of the really interesting questions is, in what way do physical processes underlie information processing in the contextual ways crucial to biology?" (See this Plus article for more on the mystery of DNA and evolution.)

Computers are a good example to study. They are the ultimate information processors. We interact with them through applications that are quite easy to understand, like browsers and word processors. At the machine level, all the information they store and manipulate is represented by 0s and 1s (see here to found out how). And at the very bottom level all of this is implemented by electrical currents. In this case we do understand how the fundamental physics, involving electrons and photons and so on, allows information to do its work. We understand how compilers and interpreters transform the same information patterns between different levels of implementation in the computer. Similarly, we can hope to understand how fundamental physics enables information transformation and use in other contexts too.

But there is another possibility that feels more radical: that information isn't just part of reality, but that it defines reality. Computers again give a great analogy for understanding this idea. Imagine the world created by your favourite computer game. What defines this world aren't the particles that make up the screen, or even the particles that make up the computer's electronic circuits. What defines it is the program that runs it. And a computer program, whether represented in a programming language or a string of 0s and 1s, is information. Perhaps something similar goes for the world we live in. Perhaps saying that reality is build out of fundamental particles is slightly misleading, as what really matters are the rules that describe how they fit together and interact. What really matters is information.

The idea that it's really information that makes the world is captured in the physicist's John Archibald Wheeler's famous catch phrase "it from bit". As Wheeler put it, "Information may not be just what we 'learn' about the world. It may be what 'makes' the world." Black holes can be understood using information. (Simulated view of a black hole by Alain Riazuelo.)

It's heady stuff, but what is certain is that thinking in terms of information has proved very useful in physics. The second law of thermodynamics, for example, which says that heat naturally flows from hot bodies to cold ones, puzzled physicists for a long time because there is nothing in the laws of physics that stops "hot" and "cold" molecules from moving the other way around. It was an information based interpretation that finally explained the law (see this Plus article for more). Similarly, black holes, whose gravitational pull is so strong that not even light can escape from their vicinity, are better understood if you think of them as things that swallow up information, rather than things that swallow up matter. (See here for more about information and black holes.)

One thing is for sure: information is an interesting thing that poses many intriguing questions. In collaboration with the Foundational Questions Institute we would like to take up the challenge. Our Information about information project will bring you articles that explore and answer some of those questions, based on interviews with leading experts. Click here to find out more.

Permalink Submitted by Anonymous on August 6, 2014

George Ellis makes an interesting point about the abstract nature of information contained in books. This seems to be very much the same idea as what Karl Popper called the 'World 3' of objective knowledge, which he loosely categorised as 'the contents of books and libraries'. This has been one of the less-regarded parts of Popper's thought, sometimes decried as 'mystification'. It is good to see these ideas being supported.

Permalink Submitted by Anonymous on September 8, 2014

The idea that the world is to be fundamentally understood not in terms of matter but as the arrangement of matter is at least as old as Plato and Aristotle, at least one of whom made their entire philosophical career exploring the consequences of this thought, in his Theory of Forms.

I honestly don't know why some physicists (not found on Plus, thankfully) publicly bash philosophy so much when certain cutting-edge physics ideas as this were hypothesised and argued through 2 500 years ago! *Sigh*

Permalink Submitted by Anonymous on October 20, 2014