Everybody knows what symmetry is. Even children can tell a symmetrical shape from one that's not. What's less-known, though, is that symmetry plays a central role in modern physics. Why? 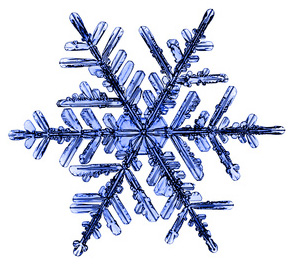 A real snowflake is not perfectly symmetrical — but you get the idea.

To see the attraction of symmetry, first note that it gives you the power to predict things. Think of a perfect snowflake with its beautiful hexagonal symmetry. If I give you a picture of one of the six spikes, you immediately know what the whole thing looks like: simply fit six copies of the spike around a common centre point, and that's your snowflake. It's this predictive power that physicists have been exploiting, albeit in a deeper and less obvious sense.

We usually think of symmetry as something visual, but it's actually a much wider concept. Symmetry is immunity to change. The snowflake has hexagonal rotational symmetry, because rotating it around its centre through a 60 degree angle leaves it looking the same. It's also got reflective symmetry because it looks the same when you reflect it through a line cutting it in half. If you think of symmetry as immunity to change — as invariance — then you realise that symmetry doesn't have to be something you can see. If you're just as happy to drink tea as you are coffee, then your happiness is invariant — symmetrical — under the transformation that swaps tea and coffee.

From patterns to laws

Physicists' fascination with invariance isn't a new thing. The ancient Greek philosopher Plato famously believed that all the things we see around us are but imperfect manifestations of perfect, and unchanging, forms that live in an abstract world of ideals. "Plato's emphasis was upon the unchanging aspects of the world, the great symmetries behind the appearances," explains John Barrow, mathematician and cosmologist at the University of Cambridge (you can watch our interview with him below). Not everyone agreed with this idealism, Aristotle in particular was much more pragmatic. But Platonism seems to ultimately have won out. For many hundreds of years physicists have been chasing those perfect forms behind the outward appearances.

"At the time of Isaac Newton scientists operated by carrying out experiments or observing things in the world, explains Barrow. "Then they would try to see patterns in what they saw: they would try to guess a rule or a law which governed those patterns. These laws are not things we see. We only see the outcomes of the laws. But the laws are regarded as something deep and fundamental about the Universe. So they are the modern counterparts of the Platonic perspective."

From laws to conservation

Newton's laws of motion tell you how an object will react when a force is applied to it. It doesn't matter whether it's a ball kicked by a footballer, or a bullet fired by a gun. The laws are general enough to describe any situation. They are simple and powerful. 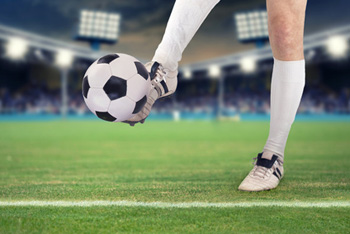 When the footballer kicks the momentum of the foot is transferred to the ball.

It turns out, however, that there are even deeper invariances in the world. When a footballer's foot strikes the ball, its momentum (that's the product of its speed and its mass, which measures the "amount of motion" in the foot) doesn't disappear. Instead, it is transferred to the ball. While it can't be lost, momentum also can't be created from nothing: a stationary ball won't start moving unless it is kicked. Momentum is something that is always conserved.

And it's not the only conserved quantity: energy, and angular momentum (the analogue of momentum for circular motion) are other examples. In fact, conserved quantities seem to abound in physics. And they are powerful. Conservation of momentum is a consequence of Newton's laws of motion. If you assume the laws are true, a quick exercise shows you that momentum must always be conserved. But you can also go the other way around: if you assume that momentum is always conserved, you can show that Newton's laws must hold.

The consequences of this are quite astounding. Simply assuming that the laws of nature, whatever they are, should be symmetric under translation allows you to deduce that momentum is always conserved, which in turn gives you Newton's laws of motion. "Instead of saying that a particular law of cause and effect [such as Newton's] governs motion, you could say that [motion is governed] by a certain invariance, by the fact that something more abstract, almost Platonic, never changes," says Barrow.

Modern physics is based on the idea that symmetry is indeed a fundamental feature of nature and seeks to exploit it maximally. Einstein's relativity, as well as all our theories describing the fundamental particles and forces of nature are all based around symmetry. (The famous Higgs boson is an example of a particle whose existence was predicted by symmetry considerations. You can find out more in next article of this series). And while our theories are not yet complete, the symmetry approach has proved amazingly successful. "You write down your equations, you understand the symmetries of those equations, and they give you tremendous predictive power," says John Ellis, Clerk Maxwell Professor at King's College, London. "I'm not aware that in any other domain of human endeavour you have the same power."

To find out more about symmetry, the laws of nature and their outcomes see Stuff happens: Laws versus outcomes.

Marianne Freiberger is Editor of Plus. She interviewed John D. Barrow and John Ellis in December 2015.

Permalink Submitted by Anonymous on February 25, 2016

"A real snowflake is not perfectly symmetrical - but you get the idea". Yes, that picture's a wonderful but not perfect example of the point in the text: "If I give you a picture of one of the six spikes, you immediately know what the whole thing looks like: simply fit six copies of the spike around a common centre point, and that's your snowflake". On examination those spikes differ from each other in the size and disposition of the offshoots they bear, but not haphazardly. For example the "south east" spike sports offshoots whose length is clearly limited by those on the adjacent two spikes, that is until it reaches out far enough into sufficient space to branch out on its own more freely. The southwest spike is similarly having a crowding effect on the east spike, as does its colleague the northeast. So it's not one but at least two you need to predict. This triple may explain the overall hexagonal structure. What's the law here? Maybe that objects - gases, crystals, tree branches - expand into the available space, limited by neighbouring expansions. What rules do they use to accomplish this? Those may be along the lines of Fibonacci and related sequences which essentially describe asymmetric, not symmetric, division and expansion.

Getting my directions mixed up as usual. Should have written the southwest spike crowds the west spike, as does the northwest spike. (Mind you, maybe there's a lot to be said for exploring the knock-on effects all round the flake).