Now move up a dimension. Think of a cube, a pyramid, or perhaps an octahedron. These are all polyhedra ("hedra" is the Greek word for "base"). A polyhedron is an object made up of a number of flat polygonal faces. The sides of the faces are called edges and the corners of the polyhedron are called vertices.

is always equal to 2. Your polyhedron could be a cube, an octahedron, something more intricate like the great rhombicosidodecahedron in the picture below, or even something much more irregular. That's a truly amazing result. 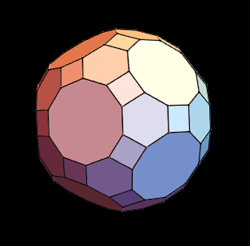 is known as Euler's polyhedron formula. Euler wasn't the first to discover the formula. That honour goes to the French mathematician René Descartes who already wrote about it around 1630. After his death in Sweden in 1650, Descartes' papers were taken to France, but the boat carrying them sunk in the river Seine. The papers remained at the bottom of the river for three days, but thankfully could be dried after they had been fished out. Another famous mathematician, Gottfried Wilhelm von Leibniz, copied Descartes' notes on the formula around 1675. Thereafter Descartes' manuscript disappeared completely and Leibniz' copy was lost until someone rediscovered it in a cupboard at the Royal Library of Hanover in 1860. Quite a dramatic history for a mathematical formula.

While Descartes may have discovered the formula first, it was Euler who had a crucial insight. When you are looking at the polyhedron formula, precise measurements don't matter: you don't need to know at what angle two faces of a polyhedron meet, or how long their sides are. The polyhedron formula belongs to the world of topology, just as the bridges of Königsberg problem does. It tells us something, not about individual objects with certain dimensions, but about the nature of space.

Proving the polyhedron formula isn't actually that hard. You can read a proof here on Plus, or find a total of twenty proofs on the Geometry Junkyard.

Great article, great pictures - thanks. I knew of Euler's formula but no the history of it.

I think there is a typo near the end of the article: "you don't need to know at what angle *to* faces of a polyhedron meet".

Thanks for spotting that, we've corrected it.