Maths in a minute: The gamma distribution

times. For example, you might know that on average you'll see three new posts on your social media feed per minute. This doesn't mean that the event will occur at regular intervals: seeing three posts a minute on average doesn't mean you'll see one exactly every twenty seconds (which is a third of a minute).

One question you might ask yourself is, "when I switch on my feed, what's the chance I have to wait no more than

minutes until I see the first new post?" As we explain in this article, the answer is given by the exponential distribution.

Here we go one step further and ask, "what's the chance I have to wait no more than

you have to wait at most

events is given by

could be any positive integer and

any amount of time measured in minutes.

rounded to 3 decimal places. The plot below shows the distribution for

. The dashed lines correspond to our example of 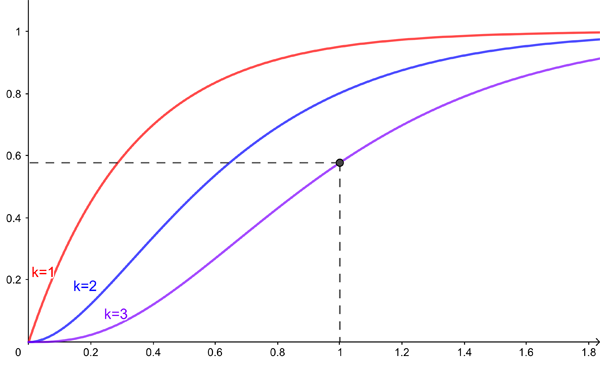 The cumulative function for the gamma distribution with a=3 and k=1, k=2, and k=3.

is a positive real number and

a positive integer. The function

above is the corresponding cumulative function. (To be absolutely precise, because we are assuming

can be a continuous quantity.)

The purple curve corresponds to the example

and the shaded area gives the probability that you have to wait no more than one minute to see three posts. 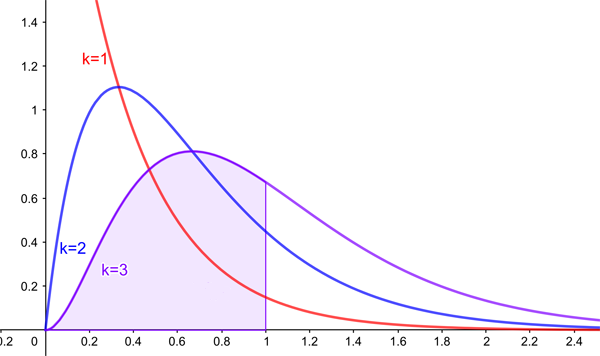 The mean of the exponential distribution, also known as the expectation is

Loosely speaking, this means that if we switched our feed on lots and lots of time and each time counted how long we waited to see the first

post, the average of wait times would be a

The variance of the exponential distribution, which measures how the individual probabilities are spread around the mean is