The Earth has a magnetic field and that's why the needle of a compass always points North. People have been using compasses to find their way around for over 2000 years, but we still don't know where the Earth's magnetic field comes from and how exactly it behaves.

"It's unbelievable that people are living on the Earth and not understanding why the compass needle points North," says Emmanuel Dormy, a mathematician who is currently co-organising a research programme about the topic at the Isaac Newton Institute for Mathematical Sciences (INI) in Cambridge. Only the most cutting edge of maths and science questions get discussed at the INI — which goes to show just how mysterious the Earth's magnetism still is.

The Earth is a dynamo

As a very crude approximation, the Earth's magnetic field is like that of the familiar bar magnet, which has poles at either end and generates magnetic field lines all around it. 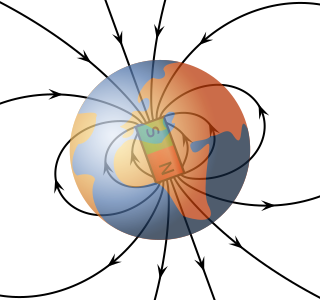 As a crude approximation the Earth's magnetic field looks like that of a bar magnet. Figure: Mike Run, CC BY-SA 3.0.

The details of the Earth's field, though, are a lot more complex. Scientists think that it is generated by electrical currents running through the liquid, molten iron that forms the outer layer of the Earth's core. In effect, the Earth behaves like a massive dynamo, not unlike the dynamos that power bicycle lights (you can find out more in this article). But because the liquid in the Earth's outer core is continually sloshing about, the Earth's magnetic field displays tangles a simple bar magnet can't rival, and it also changes over time — it can even flip, reversing its North and South magnetic poles. The details of what's going on, and the theory explaining the dynamo process, are far from understood.

Computer simulation of the Earth's field. The lines represent magnetic field lines, blue when the field points towards the center and yellow when away. The dense clusters of lines are within Earth's core. Image courtesy NASA.

"Of course we all know technical dynamos, but they work only because there's a complex arrangement of wires, sliding contacts, and so on," says Ulrich Christensen, who organises the INI programme alongside Dormy. "[By contrast] the Earth's iron core is an unstructured ball of fluid and it's much more difficult to understand how in such a system a magnetic field can be generated."

The Earth isn't the only body that behaves like a dynamo. Other planets in our solar system have magnetic fields too, as does the Sun and other stars further afield. The magnetic field of our Sun determines the space weather our own planet experiences — this includes beautiful phenomena like the Northern and Southern lights, but also things like solar flares, which can be dangerous for Earth-made technologies. "Solar flares, which are bursts of particles emanating from the Sun, could be a threat to low-flying satellites whose electronics are very sensitive," says Christensen. "Understanding better what causes solar flares, and maybe one day being able to predict them, could save dollars, pounds, or Euros."

Excitingly, there's even a role for aliens in this story. Because the magnetic field of a star determines some of the conditions on the planets that are orbiting around it, magnetic fields could one day help us with our search for life elsewhere in the Universe.

Now is a good time

First and foremost, the study of the magnetic fields of planets and stars is part of fundamental science, our attempt to lift a lid on the mysteries of the cosmos. Now is a good time to focus on this area of research. Over the last couple of decades new technologies, such as the Juno spacecraft currently orbiting Jupiter, have been providing an unprecedented wealth of information about magnetic fields, with more expected in the near future. 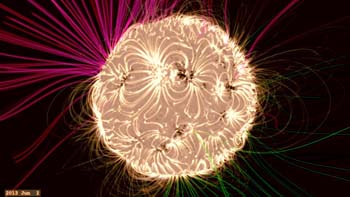 Such data not only gives the vital statistics of the magnetic fields of planets and stars — their strength and overall shape — but also informs the theory behind them. An example concerns the magnetic field of the Sun, which flips direction every 11 years. "We still don't have a detailed theoretical understanding of why that occurs on that time scale and why it's not 20 years, or 100 years, or 5 years," says Matthew Browning, another co-organiser of the INI programme.

"The Sun is an amazing laboratory for studying dynamos, but it's a laboratory you can't control the knobs on — we can't spin the Sun up faster, [for example]." Observation from other stars can replace the twiddling of knobs to some extent, showing what happens to magnetic fields of stars that spin at a different speed or are brighter or dimmer. "Within the last decade or so there's been a flood of data that provides us with powerful constraints on the kind of magnetic fields you can build in other stars, and that tells us something about how the Sun builds its field too."

More generally, observations have shown that the nature of magnetic fields of planets and stars can vary greatly. A key challenge the INI programme seeks to address is to try and explain these variations.

Like any physical theory, the theory that describes celestial and terrestrial dynamos is built around mathematical equations. On the one hand there are Maxwell's equations of electromagnetism and on the other the Navier-Stokes equations, which describe the behaviour fluids. Combined, these two sets of equations form a theory that goes by the beautiful name of magnetohydrodynamics (MHD). It's what you need to describe the behaviour of electrically conducting fluids, such as the liquid iron that forms the Earth's outer core, and the magnetic fields they generate.

One thing a theory like MHD allows you to do is formulate mathematical models that describe the dynamo action of the Earth or other planets and stars. The models can then be used to build computer simulations of the magnetic fields, which give you a way of confronting theory with observations. If your model is good at capturing the physical processes involved, then the simulated magnetic field should look like what we observe in reality. If the simulations don't chime with observation, then you know that your model is missing something. If a simulation produces a phenomenon that you observe in reality, then you might be able to figure out what aspect of the model produces it, giving you clues as to the physical processes at play.

"In the last one or two decades we saw tremendous progress in large-scale simulations of [the dynamo process]," says Christensen. "With such simulations we can explain many properties of the Earth's magnetic field — not just that it looks like a bar magnet at first glance, but also how it changes with time, what is the fine scale of it, and why it occasionally reverses its direction. We're not quite as advanced with understanding [the magnetism of stars] but certainly we can expect more progress in this direction. It's a rapidly developing field aided strongly by direct numerical simulations and also new observations."

Despite these advances many questions remain open. "As far as we can tell, the motion [of fluids] in the core of the Earth and the other planets is incredibly complicated, extremely chaotic, very three-dimensional, with many things happening driven by different sources," explains Peter Davidson, another co-organiser of the INI programme. "But when you look at the magnetic fields of Saturn, Jupiter, or the Earth from a distance, all you see is [the magnetic field of] a steady bar magnet, occasionally reversing." The question is how such complicated and messy processes can create something so steady, simple, and ubiquitous. 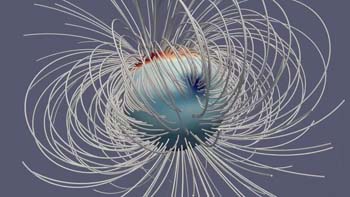 The chaotic nature of the processes that happen inside planets and stars also hampers the computer simulations. When a system is chaotic, even things that happen on very small scales — say the size of a room inside a star as large as the Sun — can impact on the overall behaviour of the system. No supercomputer in the world can make all the calculations necessary to ensure that processes of all scales are represented in a simulation.

This computational problem adds to a mathematical one: generally, there aren't any neat formulae giving you the solutions to the MHD equations. Indeed, we aren't even sure that solutions exist for all the equations that arise in the context. This is why theoretical maths is hugely important in the field. "There is a need for mathematical development," says Dormy. "It's not enough to have measurements, observations, or numerical models, one needs to have a theoretical understanding of what is happening, and this relies on technical mathematical developments."

What is needed, therefore, is a multi-pronged approach, allowing researchers from different areas to pool their expertise. This is what the INI programme aims to provide. "In our programme we have participants with a very wide diversity of backgrounds," says Christensen. "There are people who look at fundamental mathematical problems, there are numerical modellers, there are people who [make] observations of the Earth's magnetic field, or fields of the Sun and the stars. [The programme provides] an excellent opportunity to have lots of time to have discussions across different fields."

Dormy agrees. "The INI is an amazing place where people gather and meet informally. People with very different backgrounds have coffee together and discuss. It's quite clear already that new collaborations are emerging from that." The fruit of these collaborations may help explain much more than just compasses. We'll be sure to report.

This article is based on an interview with the organisers of Frontiers in dynamo theory: from the Earth to the stars, a research programme at the Isaac Newton Institute for Mathematical Sciences. You can see a video of the interview, which was conducted by Dan Aspel, below.