The shape and fate of the Universe

It's taken humanity a very long time to work out that the Earth is round. This isn't surprising, seeing that we're too small to notice the curvature of the Earth as we walk around on it. To someone as small as us the Earth appears flat and infinite in all directions. 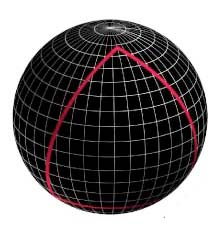 But are they? The first is that general relativity is true. The theory has been tested many times and has always stood up to the tests admirably, so physicists on the whole take it to be true (though there are dissenters, see here). Another assumption is that the Universe is isotropic, that is, as we look in the various directions in the sky, no direction stands out over an other, they are all the same, on average. This idea may seem strange at first, since the world definitely looks different in different directions. However, this assumption refers to the average look over large volumes of space. Based on current observations, this average really is the same everywhere, so the Universe is indeed likely to be isotropic. One you accept isotropy, then homogeneity can only fail if you accept that our location in space is somehow special, an idea that physicists reject.