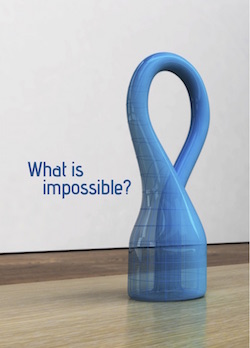 The beautiful image on our postcard (created by Charles Trevelyan) is a Klein bottle – a very strange shape that only has one side (as opposed to an inside and an outside). Strictly speaking Klein bottles cannot actually exist in our three-dimensional word but are possible in four dimensions. You can meet them and find out why in Introducing the Klein bottle, with more details in Inside the Klein bottle. (And if you're really keen you can even knit one.) And if you're wondering how (and perhaps, why) mathematicians think in higher dimensions, you can find out in these articles and their accompanying podcast.

Just because something is impossible doesn't meant it's not interesting. In fact, sometimes understanding why something is impossible leads to new mathematics. A parlour game played in Königsberg in the eighteenth century turned out to be impossible to win and Leonard Euler's explanation of why was the start of a whole new area of maths that is now vital to daily life. You can read more in From bridges to networks or watch our very home-made video!

Perhaps the most famous impossible mathematical problem is Fermat's last theorem. Not only did this take over 300 years to prove, it also generated stunning new techniques and was a fantastic story of human endurance. You can read an introduction to the result and its impact on maths, get a glimpse of Andres Wiles' experience of finding the proof and sink your teeth into some of the mathematical details.

And if you'd like to conquer the impossible yourself, why not trisect an angle with origami!

Thinking about mathematical impossibilities can also lead to a deeper understanding of mathematics itself. To find out more, read:

Permalink Submitted by Anonymous on July 30, 2015

Here's an impossibility in "Pre-calculus workbook for dummies" by Yuang Kuang:

This would appear to violate at least two fundamental conventions. One is that we aren't allowed to change the question. The other is that two different numbers can't be equal, otherwise what would be the point of trying to come to any numerical answer if any other were correct? As against that I've used the same kind of extrapolatory logic by which mathematicians make sense of other initially strange expressions like 2^0 or 5-9. In fact I'd call the inference I suggested here Modus Corrigens, since it corrects the question, and compares with Modus Tollens of medieval logic.

Logic, in its creative, interrogative and exploratory incarnation, characterises challenges to declarations of impossibility in the physical sciences too. ("Impossible reaction" , Philip Ball, in "Nothing: from absolute zero to cosmic oblivion" New Scientist publications)

To echo that old joke pinned up in workplaces, mathematicians can do the difficult, the impossible takes a little longer. Centuries longer sometimes.

The solution is supposed to tell you what "x" is and you can't very well do that if you subtract it from both sides so you must leave it in the original form. Then what is "x"? Just like what is x♠2 = √-1 You can't find "x" so this whole equation is defining a new number system , exactly the way imaginary numbers were defined. 3-4(2-3X) = 2(6x+2) x is a number, It is the number in the equation. You can't write this equation as "x= a number" but you can leave it in its original form. Here is also an equation in which the rules of algebra fail. You can't always subract the 12x from both sides, I think this is the addition property of equality. so If i do an experiment and try different values of "x" I would probably get a fuzzy answer. If I put a very large number as "x" the answer approaches equality so X is probably infinite. But I don't believe infinity exists because of quantum uncertainties. Points or zero and infinity do not exist in the real world so how can mathematicians use concepts that are physically impossible. So if you try any number , not infinity in the equation then you get two different values for "x" . The equation needs two different values for the same variable. Just like quantum mechanics where a particle can be in two different places at the same time.

Permalink Submitted by Anonymous on August 5, 2015

Here's a question for Rachel (or anyone else of course). Is a genuinely spherical spiral possible?

A familiar spiral line in two dimensions can be viewed as a circle continually increasing in radius and so expanding to surround its former self without ever completely succeeding. Can a sphere, seen as a three dimensional circle, wrap around itself likewise? I suppose it would have an opening that would partially expose a spherical surface, and that an ant could crawl into and eventually reach the centre without having to bore through anything.

I'm definitely not thinking of nested spheres, just one sphere. Nor of lines or bands spiralling over the surface from pole to pole. Nor of a loosely rolled up rectangle, that's closer but too cylindrical. A cowrie shell? Hmm, maybe that's a homeomorphism of what I'm talking about, or is it just that aforementioned rolled up rectangle fused at the ends? A Klein bottle?

The point in the article that a Klein bottle is only possible in four, not three, that dimensions is unclear to me. But I can somehow see it applying to a spherical spiral that exists as an ongoing computer animation rather than an unchanging object.