A new particle that has recently been discovered at CERN confirms predictions made by theoretical physicists over six years ago. The result, delivered with a little help from the Darwin supercomputer, confirms existing particle theory, but also opens the door to new physics. 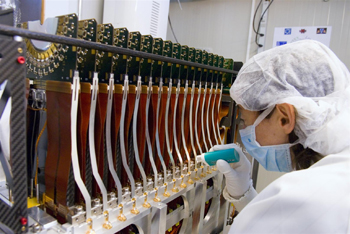 A vertex locator module being assembled in the LHCb clean room. This is used to measure the point at which two protons in the beam collide from the tracks of particles produced in the collision. Image © 2007 CERN.

The new particle, discovered by the CMS and LHCb, belongs to the family of mesons: particles made up of two of the elementary building blocks of matter, a quark and an anti-quark, bound together by the strong nuclear force. The quarks involved are a so-called beauty quark and the anti-particle of a charm quark, which puts the new particle into the subfamily of Bc mesons. Its mass is exactly what was predicted by physicists of the international HPQCD Collaboration in 2012.

Compared to gravity, which humanity has known about ever since it has been able to drop apples, our awareness and understanding of the strong nuclear force is relatively recent. It was only in the 1930s that physicists discovered neutrons and worked out that, together with protons, these particles make up atomic nuclei. Since the nuclei of atoms don't tend to fly apart, something had to be holding the particles together against the electromagnetic repulsion due to protons being positively charged. It was clear that gravity was not strong enough — there had to be another force, a strong nuclear force.

Then, in 1948, a state-of-the-art particle accelerator at the University of Berkeley, California, found that when protons and neutrons were smashed together, exotic particles emerged that had previously only been detected in cosmic rays. These new particles are what we now call mesons. As more powerful accelerators came online during the 1950s a bewildering zoo of new particles was discovered. A level of order was re-established in the 1960s when physicists predicted, and then experimentally observed, that all those different particles were made of the same fundamental building blocks: quarks. According to the quark model, particles called baryons, which include neutrons and protons, are formed from atoms of three quarks and mesons from a quark and an anti quark. (You can find out more about the physics if elementary particles in this article.)

Harking back to the mathematics that had been developed to describe the electromagnetic force a generation earlier, physicists searched for a theory that could explain all they had learnt about quarks and the strong interactions between them and in the early 1970s they found one: it's called quantum chromodynamics (QCD) and it's now an important part of the standard model of particle physics. (You can find out more about QCD and its development in this article.)

Two of the heaviest quarks — the charm quark and the beauty quark — and the mesons they constitute are also important for testing the accuracy of the standard model (more on this below), which is why physicists are particularly interested in them. In 2005 the HPQCD Collaboration set out to calculate the mass of the simplest Bc meson. This sounds like a straight-forward task but it isn't, far from it. Many calculations one might want to carry out in QCD, including finding the mass of a particle, are extremely hard. 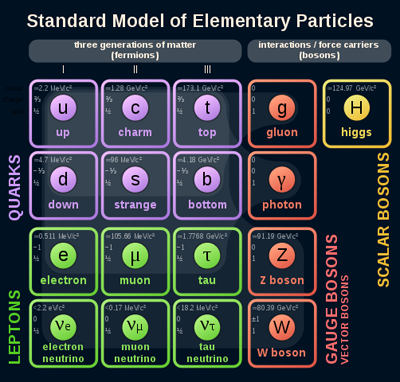 This table shows all the fundamental particles that are currently part of the standard model of particle physics. But more may be discovered in the future!

As a work-around physicists have taken an approach that is familiar from meteorology. Because it's too difficult to predict the weather of absolutely every point in the country at every time in the near future weather, forecasters chop space into a grid and time into discrete steps. Similarly, lattice QCD considers the theory confined to a spacetime grid (find out more here).

This makes calculation tractable, but by no means easy. To work out the mass of the simplest Bc meson, HPQCD members (working with a team at FermiLab) still needed to enlist the help of the Darwin supercomputer as part of the national DiRAC supercomputing facility.

A little while after the calculation was complete, the meson in question was discovered by the CDF experiment at the Fermilab Tevatron Collider. Its observed mass agreed with what the HPCQD collaboration had predicted: it's 6.27 GeV/c2, over six times the mass of a proton.

The meson involved in the successful prediction is simple in the sense that it has the lowest possible energy level Bc mesons can have, which makes the calculations more accessible. By 2012 the QCD calculations were much improved due to theoretical work done by the team of Ron Horgan at the University of Cambridge. Together with increased computing power of the DiRAC facility, this enabled HPQCD members to predict the masses of many more Bc mesons with different energy levels and configurations of quarks. One of them was the one discovered at CERN this year and its mass is again in good agreement with predictions. The others have yet to be observed, so watch this space.

The result illustrates the power of QCD as a predictive theory of particle physics. But while it's great to see a standard theory confirmed, it's perhaps even more exciting to search for phenomena it can't explain.

Mesons containing beauty quarks (called B-mesons) are particularly interesting in this context: they provide a tool for looking for new particles physicists are not yet aware of. (In fact, the LHCb experiment is designed to measure the properties of particles containing the beauty quark.) Like many other particles, mesons are unstable: they exist only for short moments before decaying into other particles. When physicists say such an unstable particle has been discovered in an accelerator, it is not because they caught sight of the beast itself, but because they found unmistakable signatures of the particles it decayed into in the accelerator data. The rare decay processes of B-mesons are sensitive to the existence of new particles: if there are particles out there that physicists are not yet aware of, then these particles are likely to mess with the B-mesons' decays in a way that can be seen at an accelerator.

The approach developed by HPQCD, which has been so successful in predicting the masses of the Bc mesons, is being used by Horgan and Matt Wingate of the University of Cambridge to study these rare B-meson decays. "The B-meson family provides a new chapter in this search for new physics that theory and experiment are now beginning to exploit," says Horgan. "The teams at Glasgow and here at Cambridge are pushing ahead with more precise calculations of B masses and differential decay rates on DiRAC 2.5."