Holly Krieger is one of this year's winners of a Whitehead Prize, which is awarded annually by the London Mathematical Society to mathematicians who are in an early stage of their career. Krieger works at the University of Cambridge, the home of Plus, so we took the opportunity to talk to her to find out about her work.

"It's exciting to have my work recognised by my colleagues," Krieger told us. "This work was done in collaboration with Laura DeMarco and Hexi Ye, with lots of input from others through conversations and discussions at conferences. The prize is a nice reminder of the good fortune I have to work with all these people." 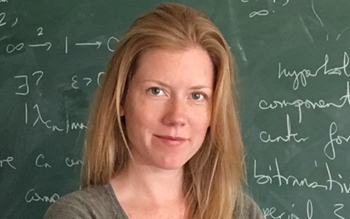 "Arithmetic dynamics is exactly what you get when you take the two words apart," says Krieger. "Arithmetic relates to those very simple notions you learn about at school: counting, integers, prime numbers and so on. These are the fundamental building blocks of what we think of as abstract mathematics." The term "dynamics" refers to systems that evolve over time. These can often be quite easily described mathematically, but can still exhibit incredibly complex behaviour in the long run.

The two areas may appear quite different, but they actually combine quite naturally. As an example, consider the following basic arithmetic procedure: given any integer, square it and add 1. If you do this to 0, the result is 0+1=1. If you in turn apply the procedure to 1, the answer is 1+1=2. Applying it to 2 gives 4+1=5, and applying it to 5 gives 25+1=26. You could keep going like this forever, at each step in time applying the procedure to the number you got at the previous step. The result is an infinite sequence of integers, starting with

"Here is a very basic question about this system," explains Krieger. "I can take each number in this sequence and factor it into its prime factors — which prime numbers appear when I do that?" There is no explicit answer to this question, but we can get a statistical handle on how many different primes appear in this way. "It's a relatively sparse set of prime numbers [that appear as factors]," says Krieger. "Because the values [in the sequence] quickly get quite large and they tend not to have small prime factors. It's not an insignificant piece of mathematics to understand these prime factors, even though it's very simple to ask the question."

The dynamical system we just described doesn’t exist in isolation. Rather than considering the expression

you could consider the expression

for some other number

. For some values of

exceeds all bounds: it escapes to infinity. For other values of

the sequence always stays within certain bounds: it doesn’t escape to infinity. The most dramatic example of this is occurs when

. In this case, the calculation is simply

so the sequence you end up with consists entirely of 0s.

Do we know which values of

lead to which kind of behaviour? The answer is yes: escape to infinity is only prevented if

to take non-integer values, then the sequence stays bounded precisely when

lies in the interval

We can go further still: we can allow

, don't give us a sequence that escapes to infinity. The picture we'd get from colouring in those points would be the famous Mandelbrot set: a beautifully intricate fractal whose shape is intimately related to the behaviour of the dynamical systems that lie behind it. 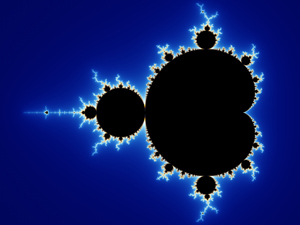 The Mandelbrot set, too, plays a major role in Krieger's work. "There are some special values inside the Mandelbrot set," explains Krieger. We already saw above that c=0 results in a dynamical system forever stuck at 0. There are other values of c that lead to similarly limited dynamics (you might want to try c=-1) . "Studying where these post-critically finite points lie in the Mandelbrot set is the type of question that I work on."

You can find out more about the Mandelbrot set and the related dynamical systems in this Plus article.

What drew Krieger to working in arithmetic dynamics? Partly it was the age-old lure of number theory, whose seemingly simple questions often turn out fiendishly hard to prove. "I like the simplicity of the questions, combined with the difficulty and depth of the techniques," she says.

But while number theory is old, arithmetic dynamics is new. "Arithmetic dynamics is a relatively young field, so it has a lot of energy. In the 1990s it was realised that there's a very deep connection [between the theory of dynamical systems] and hard questions in number theory. The question was, 'what can we do with this analogy; is there power there?' This led to an entirely new way of studying dynamical systems. It's that innovation that I liked."

People too played a role in Krieger's decision to go into the field. "The leaders in the field when I went into it were high-calibre mathematicians, doing fantastic things, without even a hint of arrogance or exclusivity. The energy of the people and the atmosphere of the field is what drew me in."

One flew past the spelling checker...

Under Numbers and Fractals, the sentence "In this case, the calculation is simply 0^2=2 so the sequence you end up with consists entirely of 0s." has a rather glaring typo.

Thanks for spotting the typo…

Thanks for spotting the typo, we've corrected.