The Austrian painter and architect Friedensreich Hundertwasser once bemoaned what he called the "tyranny" of the straight line: "It is the line which does not exist in nature," he said and condemned any design based on straight lines as "stillborn". The first four steps in creating the Von Koch snowflake. Image from Wikipedia. Click here to see the snowflake emerge from an infinite number of steps.

A bit dramatic perhaps, but he had a point that wasn't just relevant to art and design. The straight lines and perfect circles of classical geometry have given rise to millennia worth of beautiful mathematics, but there are natural forms whose intricate complexity they just cannot capture. The outlines of clouds, shorelines and the intricacies of the humble broccoli are examples. And it turns out that, far from being beyond the reach of mathematics, these complex forms can emerge from simple mathematical rules — though mathematicians didn't fully realise this until computers arrived on the scene.

Fractals are geometric objects that exhibit complex structure at every scale. No matter how closely you zoom in on a fractal, its complexity doesn't diminish and you often see the same structures appearing again and again. The famous Mandelbrot set is a fractal. Image Wolfgang Beyer.

A famous example is the Von Koch snowflake. Start with an equilateral triangle and replace the middle third of each side by a "spike" consisting of two sides of a smaller equilateral triangle. Now do the same for each of the twelve straight-line segments of the resulting shape and repeat, ad infinitum. The shape you get in the end, after an infinite number of steps, exhibits the same spiky structure at every level of magnification: you'll never see a piece of straight line in its outline, because every straight-line piece that was once there has been broken up and adorned with a spike.

Mathematically, fractals live in a strange world in between dimensions. You couldn't call the Von Koch snowflake "one-dimensional" because it contains no straight lines or smooth curves at all. No amount of zooming in will reveal such one-dimensional components. On the other hand, the snowflake isn't two-dimensional either, because it occupies no area. In fact, it takes a new definition of "dimension" to sort out the snowflake's place in the dimensional hierarchy. According to this definition, the snowflake has a dimension of around 1.26. Having a fractional dimension, one that's not a whole number, is what characterises the fractals. Examples of fractals have been known to mathematicians for some time, the snowflake was first published in 1904 by the Swedish mathematician Helge von Koch, but they were regarded as mathematical oddities; strange artificial constructs. The fact that fractals can also emerge from everyday mathematical objects, such as quadratic functions, only became apparent with the advent of computers. Making the fractals visible can involve hundreds of thousands calculations that are impossible to perform if you're just working with pencil and paper.

Fractal structures appear all over the place in real life, too. The fluctuations of financial markets look similar whether you look at a graph representing a whole year, or just a week, in other words, they exhibit self-similarity. There is an abundance of fractal patterns in nature: coast lines, galaxies, turbulent waters, and more. Using mathematics it is possible to program a computer to draw fantastical, yet life-like, fractal landscapes. 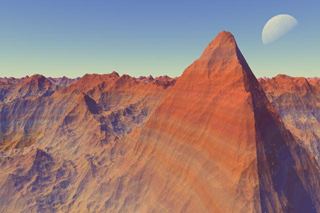 Like the Von Koch snowflake, natural fractal structures can often be modelled by repeatedly applying a set of relatively simple mathematical rules. This doesn't only make them perfect candidates for computer exploration, but also illustrates how astonishing complexity can emerge in apparently simple mathematical or physical systems. Indeed, fractals are intimately linked to chaos theory, which explores processes that, while not being random, are still unpredictable.

The theory of fractals has many practical applications. It is used to understand the fate of our Universe, of financial markets and of populations of animals and humans. In medical research it's used to shed light on the structure of our brains and our digestive system, and in developing medical imaging techniques. Fractal geometry has applications in image and video compression and even to spot art forgeries. And that's quite aside from the new world fractal geometry has opened up for artists and musicians.

If you would like to explore dynamic geometry then take a look at dynamics explorations feature on our sister site NRICH.

If you would like to explore dynamic geometry then take a look at dynamics explorations feature on our sister site NRICH.

This article is based on our report of the death of Benoît Mandelbrot in 2010. Marianne Freiberger is Editor of Plus.