What is a robot?

What image does the word "robot" conjure up? For many of us the immediate image is of some metal man/woman, that acts and behaves just like a human being, but is stronger, faster, more intelligent and (usually) fearsomely armed. Robots are a staple of science fiction, with many books and films devoted to stories of robots turning on their creators or even seeking to replace human beings entirely. 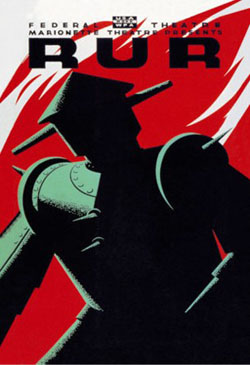 The word "robot" comes from the Czech term "robota", which means "forced labour". The term was coined in K. Čapek's play R.U.R. (Rossum's Universal Robots, 1920). The idea of robots becoming a part of human society was then greatly popularised by the science fiction writer Isaac Asimov through his hugely successful novels on robotics. In these he saw a future in which robots (guided by Asimov's three laws of robotics) looked and behaved in a very similar manner to human beings, and even had a sense of morality and purpose.

It is natural to ask whether the world envisioned by Isaac Asimov is going to arise in reality. Opinions are divided on this. Some say it will never happen, others that it will happen in the near future. Having seen the rapid growth in computing power in my own lifetime, I'm inclined to believe that it will happen, and probably sooner rather than later. But obviously I may be hopelessly wrong in this prediction.

In a sense robots are all around already. A modern car is not only built by a robot, but many of the workings of its engines are controlled by a computer. A modern smart phone has a level of intelligence and functionality that would have seemed miraculous fifty years ago. But, despite these advances, this seems a long way away from the future that Asimov envisaged of intelligent computers with positronic brains.

Strong artificial intelligence is the ability of a computer to exhibit general intelligence. The standard test for this is the Turing test devised in 1950 by Alan Turing. A robot passes the Turing test if a human being who converses with it cannot tell it from a human. The recent film Ex Machina was based on a story of administering this test, and how it all went horribly wrong.

In contrast weak artificial intelligence is the ability of a robot to (be trained to) do a specific (albeit complex) task. A good example of this is speech recognition. It is now routine for computers, mobile phone devices such as Siri, virtual personal assistants, and even car insurance telephone systems. In these a computer, using mathematical algorithms, is able to recognise and understand fairly complex speech, and even answer simple questions. 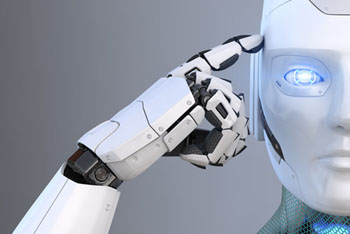 Strong AI is still some way off, but weak AI is already here.

Weak AI is routinely used in such tasks as fraud detection and chess playing robots. It has potentially transformative applications, for example in automatic vehicles. Advancing weak AI is now very much a growth industry, and is commonly called machine learning.

The point here is that intelligence is perceived, not as something that is taught to a machine (in the sense of a traditional computer program), but something that a machine learns by itself, so that it learns how to do complex tasks directly from experience (or data) of doing them. With the huge advances in computer speed, and developments in the algorithms used to program them, machine learning is growing very rapidly indeed and the algorithms that result from it are starting to have a significant impact on our lives. They often out-perform humans in these tasks. For example, the adverts placed on the Google website are put there by a machine learning algorithm. In 2015 they generated $66 billion of income. According to Sundar Pichai, the CEO of Google, "Machine learning is a core, transformative way by which we're rethinking everything we're doing".

It is possible that machine learning in the future will be used for medical diagnoses and for tailoring public services to users. The possibilities seem almost endless.